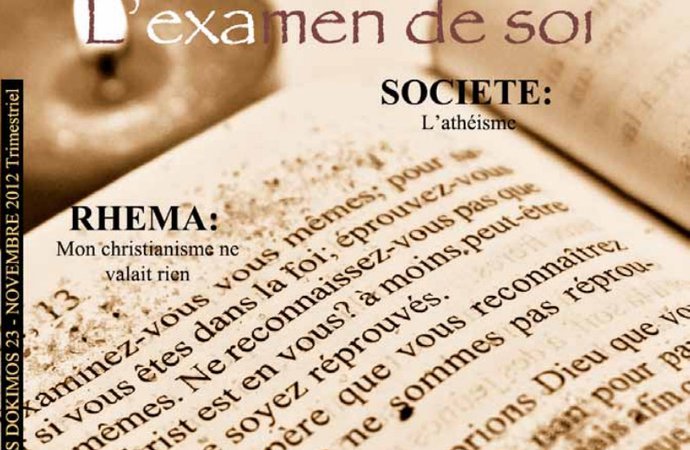 One man out of five in the world claims to be atheist. Although still very attached to Roman Catholicism, France, as far as it is concerned, is the country where the number of atheists has increased the most in 10 years, from 14% to 29%. Is Atheism on the verge of eradicating religions? In these conditions, is there still room for true faith? Is an atheist is permanently “beyond redemption”? We will see that things are not always what they seem.

ATHEISM IS NOT EXACTLY...

The Oxford dictionary defines atheism as a doctrine that denies the existence of God. This is religious unbelief, which is not to be confused with agnosticism and pantheism.

If one was to define agnosticism in a sentence, it would be "I do not know." Indeed, the word "agnostic" comes from the Greek “agnosticismos”, which itself came from the words “agnôstos”, which means "ignorant", and “gnosis”, which means "knowledge". This term therefore refers to the idea of ​​privation of knowledge, or to the inability to know what is beyond experience. Thomas Henry Huxley (1825-1895), a British Biologist, Paleontologist, and Philosopher, was the one who coined the word "agnostic" in 1869. He was a good friend of the naturalist Charles Darwin (1809-1889), which earned him the nickname of "Darwin's bulldog", due to his strong attachment to the theory of evolution. This philosophical positioning is close to skepticism (Greek skeptikos: examining), a doctrine that states that the human mind cannot determine absolute truth. In other words, the art of always asking questions without having definite answers. What a program!

Agnostic thinking is divided into two schools of thoughts: Temporary Agnosticism in Practice (TAPs), and Permanent Agnostics in Principle (PAPs).TAPs proponents reckon that one day or another, one will be able to prove the existence or nonexistence of God through science, and that when this is done, the TAPs will come to an end since, thanks to the evidence provided, people will be able to position themselves permanently in one camp or another. As for the PAPs defenders, they reckon that man will never be able to prove the existence of God rationally or through science. It is therefore a point of view that, a priori, remains irrevocable. However, it is interesting to note that among the agnostics, who represent approximately 23% of the worldwide population, some adhere to a certain extent, to a religious belief while remaining in doubt and skepticism...

Pantheism (Greek: pan: everything and theos, God) is a doctrine which states that everything is in God and that God is in everything. Unlike deism which personifies God by granting him qualities and intentions that can notably be discovered through such sacred writings and revelations, and theism, which accepts the existence of God but without granting it any determinism, Pantheism perceives the deity as an impersonal force. This doctrine has its origins in Stoicism, a school of philosophy founded by Zeno of Cition (344-262) in 301 BC. AD, and which promotes meditation and lifestyle in line with nature and reason in order to obtain happiness and wisdom in ataraxia (i.e., lack of passions and therefore suffering). Pantheism has therefore deified Nature in the broadest sense, i.e., all that exists. As such everything is considered divine and sacred: speck of dust, plants, animals and humans. This philosophical and religious approach finds its equivalent in some Eastern religions such as Hinduism or Buddhism.

As we saw in the introduction, atheism is a doctrine that does not concede the existence of any deity. As far as the story of mankind is concerned, atheist thinking is not new. Those who follow it believe that atheism is natural and that it existed way before religions. As such, from the fifth century BC, in ancient Greece, the word “atheos”, which literally means “without god”, in the sense of "breaking the relationship with god" or "denying the gods." The first philosophers who started to openly deny the existence of God or of their gods are Diagoras of Melos and Theodorus of Cyrene. Over time, although minoritory compared to other religions, atheism developed in various forms, notably under the influence of great philosophers such as Spinoza (1632-1677) and Nietzsche (1844-1900), who is well-known for his famous phrase "God is dead."

IS RELIGION ABOUT TO DISAPEAR?

Unbelief has mainly gained ground in industrialised and post-socialist countries. The welfare state that grants everyone with a decent standard of living has a part to play in it. Conversely, the poorest countries remain deeply religious. The 9/11 bombings and the increase in religious fanaticism also greatly contributed to the rejection of God. However, we can note quite logically that, overall, atheism affects the youths, while faith in God increased in those over 58 years. This of course can be explained by the phenomenon of the anticipation of death.

Atheist activism remains marginal even though the emergence of atheist associations defending secular humanist values in France and Europe has been notified in recent years, quite often in response to religious extremism. The buses plastered with atheist slogans that caused a sensation in London, Madrid and Barcelona in 2009 is a perfect example. Even the United States which is known to be a very religious country is experiencing a real coming out of the ungodly. Indeed, polls show that atheism is growing steadily, but in fact, only 13% of the world’s population are atheists. This means that nearly 60% of the world's citizens still believe in some form of deity, and that therefore religions and sects have a large reserve of manna from heaven. Moreover, in the West, there is a greater tendency to change religions as they tend to draw away or depart from the three largest monotheist religions in favour of modern pantheism embodied by the New Age.

It is difficult to properly describe the variants of atheism in a few pages, and to spell out in great details the Atheists’ philosophical arguments. Besides, there is no much point talking about it except for those who love arguing over words, and that have time to waste. One thing is clear however: atheism is a doctrine that is fundamentally rationalistic and materialistic but that, nevertheless, remains largely minority compared to religious movements. Thus, the fact that the majority of people believe in a supernatural Being who transcends confirms the scriptures that say that God has placed in the human heart the thought of eternity (Ecclesiastes 3: 11). It seems that most atheists are indifferent, anticlerical and antireligious. In other words, they are people who live their lives without worrying about whether God exists or not, and who are more critical towards religions than God. And it is easily understandable in view of the innumerable and never-ending damages religions caused. It is clear that the atheist is basically a pagan like any other, even if we are dealing with a purist (philosophical, militant, and ideological atheism). Basically, there is no much difference between him and an ultra-conservative religious person. You cannot blame him for sinning more than any ordinary man as, just as religion, atheism also has a morality based on humanism.

What arguments should be presented to convince them to believe in God? The first thing we can say is that it is impossible to draw near to God through science and logical, rational reasonings (1 Corinthians 1 :21-31). It is all about faith and common sense. No need to try and develop a telescope to try to see God, all you need to do is stop navel-gazing and start looking around: the nature that surrounds us is enough to prove the existence of a Creator (Romans 1: 20). God is not a freak who is exposed to the gaze of the curious, He reveals himself to those who seek Him with good dispositions of the heart (Proverbs 8: 17). Asserting that the universe and all it consists of in all its complexity, from the infinitely large to the infinitely small, comes from nowhere, and that it is a coincidence, is pure nonsense. So if we accept that we exist through chance, why not take chance as the only explanation for everything? Thus, the thieves will say that the stolen objects found on them are there by chance, adulterers caught in the act would explain that the person with whom they were caught in bed was also there by chance and so on. Atheism is therefore a false and bad excuse, an insult to intelligence. And when pushed to the extreme, it is mainly an expression of rejection of repentance and deep hardening.

"The fool says in his heart, There is no God! They are corrupt, they have done abominable works, There is none that doeth good "Psalms 14: 1.

Atheism is not an impregnable fortress, the preaching of the Word of God is sufficient to overthrow it (1 Corinthians 2:4-5). The problem lies mainly among us Christians. While we will not put God's Word into practice and we do not devote to Him properly, it will be difficult to demonstrate the power of God that will put an end to the senseless logorrhea of all these ungodly philosophers.