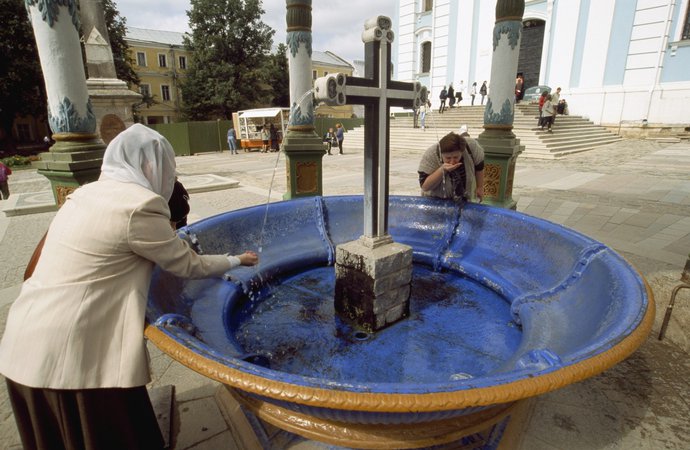 Water is everywhere. It does not consist solely of the "H20" scientists describe as fundamental to the life of all living organisms, but it also is an element that many civilisations consider as sacred. In Hinduism or Buddhism, water takes a central role. Temples are always filled with water for ablutions – those rituals of purification to which a lot of time is devoted, especially in the morning (people wash themselves to get rid of their nightly bad mood). In India, water is often very dirty, but still has this spiritual purifying virtue that goes beyond materiality. In the Koran, there are 14 references to purifying water, hence the fact that the Muslims also grant a great deal of importance to ablutions. They also play a leading role in Judaism, and are performed in two different manners: By immersing the whole body in a mikve (basin) or by washing one’s hands with a cup. The symbolic of water is also very present in the Bible. It often symbolises the Word of God that purifies, or the Spirit of God that regenerates. As such, almost all churches have an initiation ritual that implies the use of water. Baptism, which is often perceived as a symbol of freedom from the sin that separates us from God, is one of them. As far as holy water is concerned, it is often used by the Roman Catholics, the Orthodox and the Anglicans. But, does the use of holy water find justification in the Scriptures?

First of all, it should be noted that behind the Christian symbolic an ancient Celtic ritual is hidden. In Brittany, for instance, water sources have long been associated with druidic practices from which many healing and miracle beliefs arouse. Those beliefs have infiltrated Christian traditions, and still linger on today. Pope Alexander 1st (deceased in 115 AD approximately) seems to be the one who introduced this practice in the Church.

Holy water is made up of pure cold natural water. According to the Roman ritual published under the command Pope Gregory XIII (1502-1585), natural water consisted of water that came from fountains, wells, rivers, lakes, ponds, cisterns, the sea and the rain. This water was then taken, and holy salt was added to it (exclusively by a priest) to allegorically mark the union of Jesus Christ’s two natures. Salt symbolised carefulness, while water represented purity.

Holy water is usually placed at the entrance of churches or houses in order for people to anoint themselves with it when coming in and out. The latter practice is still resorted to in the countryside and in some developing countries. Superstition is so tenacious that they throw it in places where the presence of evil spirits is feared, but also on sick or dead people, and on tombs.

- Contributes to the healing of sick people

- The soils on which it has been sprinkled become fertile

- Casts out the plague, dissipates thunderstorm and lightnings

- Enables the remission of venial sins

- Keeps demons away from sick people…

In other words, if you want to lead a full and meaningful Christian life, get plenty of it!

But as usual, churchgoers of so-called revival churches are not better. Indeed, every year, hundreds of Christians go to Israel to get baptised or re-baptised in the well-known river Jordan, which supposedly has particular virtues as the Lord also got baptised in it.

Resorting to anointing oil abusively, inadequately and in an idolatrous manner to purify oneself, one’s house or material goods, but also to cast out and protect oneself against demons is no less different than the superstitious use of holy water.

WHAT DOES THE WORD OF GOD SAY?

“Then the LORD said to Moses, “Make a bronze basin, with its bronze stand, for washing. Place it between the Tent of Meeting and the altar, and put water in it. Aaron and his sons are to wash their hands and feet with water from it. Whenever they enter the Tent of Meeting, they shall wash with water so that they will not die. Also, when they approach the altar to minister by presenting an offering made to the LORD by fire, they shall wash their hands and feet so that they will not die. This is to be a lasting ordinance for Aaron and his descendants for the generations to come.” (Exodus 30:17-21).

It is a fact that in the old Covenant one resorted to water for ceremonial use, but all this was only the shadow of what was to come. Ablutions and baths cannot wash away our sins, only the perfect sacrifice of our Lord Jesus Christ can. Meditating his Word daily (which is compared to water), and above all, putting this word into practice, simply enables us to remain in purity and in holiness (Ezekiel 36:25).

"...And that is what some of you were. But you were washed, you were sanctified, you were justified in the name of the Lord Jesus Christ and by the Spirit of our God" (1 Corinthians 6:11).

"...Christ loved the church and gave himself up for her to make her holy, cleansing her by the washing with water through the word, and to present her to himself as a radiant church, without stain or wrinkle or any other blemish, but holy and blameless." (Ephesians 5:26-27).

- "History and usage of holy water" by Reverend David O'Connor

-Wikipedia on the traditions of water in various civilisations.